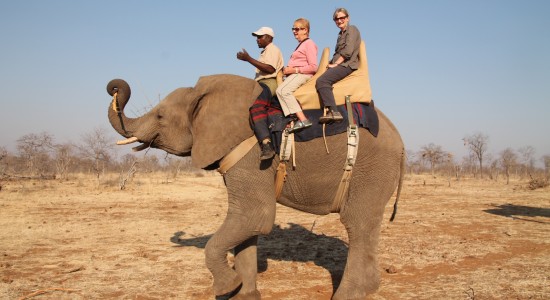 I recently had the privilege of escorting an absolutely fantastic group of twelve to Southern Africa.  After eighteen months of planning and research,  I felt confident that what we could control was in hand and I left home with my fingers crossed that the weather would be kind to us and the animals would come out to entertain!

There was no need to worry!!

We started in beautiful Cape Town with four nights to adjust to the new time zone.  The weather was glorious for the three days sightseeing included and everyone loved the location of our hotel at the scenic V&A Waterfront.

It was then on to Namibia for a seven night tour of the highlights of this stunning desert country.  To begin our adventure here  we started with a scenic flight over the spectacular and often photographed sand dunes at Sossusvlei, before heading off into the Damaraland desert to look for the elusive Desert Elephants.  We found them feeding on trees in a dry creek bed and followed as they wandered off to a nearby village to steal water from the village tank.

Etosha National Park was next, to view the colourful menagerie of animals that congregate around the park waterholes during the dry season.

At our first stop, on our first Etosha game drive we were stunned to watch as two hyenas chased a springbok straight into the trap of a pack of hungry lions. Most of us were so taken by surprise that we forgot to lift our cameras to take photos.

On the way back to Windhoek we spent a night at Okonjima, the home of the Africat foundation which is commited to the conservation of Namibias carnivore. Here we went tracking cats and found leopard and cheetah.

Next was on to Botswana and the wonderful Okavango Delta.  We spent two days exploring the peaceful waterways in morokos, motorboats and on foot before flying on to Moremi Game Reserve which we explored in safari vehicles.  On our first game drive in Moremi we came upon a group of African Wild Dogs resting in the shade.  This was a highlight for me as I have never seen them before.  Wild Dogs are one of the world’s most endangered mammals.   After Moremi we flew on to Kansane and transferred to Chobe National Park which is famous for its large herds of elephant and Cape Buffalo. The buffalo were few in number but the large herds of elephants were very impressive.

Our last stop was Victoria Falls, a spectacular sight! Here we stayed for two nights at the beautiful, historic Victoria Falls Hotel, built in 1904.  While here we toured the falls, walked with lions, had an elephant back safari and some enjoyed a scenic flight over the falls.

While at Victoria Falls we all enjoyed celebrating the 60th wedding anniversary of two of our group members, Dorothy and Noel Smith.

Congratulation to an amazing couple.

We then reluctantly came home.

I love Africa, it never disappoints me or my clients.