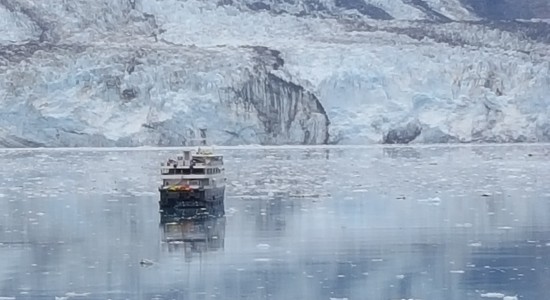 I have been lucky enough to venture to Canada & Alaska with APT and Holland America.

On the way over, I had an overnight in Sydney at the Rydges Sydney Airport, a great 4 star property with quite large rooms and an easy 1 minute walk to the International Terminal.

I was pleasantly surprised by the amount of legroom in Air Canada’s Economy class from Sydney to Vancouver, I could actually straighten my legs out under the seat in front without the knees touching the seat in front! The entertainment system is adequate as a screen in the back of the seats, touch screen controls and amply movie, tv , audio and games channel.

From our hotel in Anchorage, we transferred to the train station to commence the rail part of the trip. The Dome carriages of the McKinnley Explorer  were very spacious, offering bar service as well as breakfast and lunch all at a cost. Lunch started at USD$13.00 for a club sandwich, with the restaurant being on the lower floor. The journey lasted 8 hours and the scenery is spectacular especially at this time of year, with the trees having different coloured foliage.

Upon arrival at Denali, luggage was automatically delivered to our hotel room, a great convenience for us. Our excursion in Denali was the Tundra Wilderness Tour – a long day tour, but well worth it. Tour began at 7.00am and returned to the hotel at 3.30pm. The views of Denali really cannot be justified – it is amazing. Our day was made even more special by sighting moose, caribou, bears, coyotes and with the temperature plummeting to -4C and snowing, just completed a fantastic day all round. Certainly worth the effort to making that early start. The drive from the lodges to deep in the park is about an hour, with a couple of restroom stops along the way. A lunch pack was provided by the hotels and is only to be consumed on the bus, nil food or drink is to be eaten outside in the park.

The drive from Denali to Seward is again a long travel day, with the departure from the lodges being at 6.45am. The scenery is beautiful at every turn, snow covered mountains to the lush forests all displaying yellow, green and orange leave. Travel is via the town of Wisala, where lunch is provided for all APT and Holland America clients, in a beautiful riverfront restaurant setting. We arrived at the port of Seward at 4.00pm, where check-in onto the Holland America ship ‘Zaandam’ was very orderly and only took around 30 minutes. Luggage was delivered directly to the cabin.

Holland America Lines vessel Zaandam is a mid size vessel, with maximum passenger numbers being about 1400. The vessel is focussed more on passenger space than cabins – there are 5 restaurants, 6 bars, a movie theatre, library, many quiet seating areas, shops, casino etc. This ship really gives the feel that there is hardly anyone on board. Cabins are a very good size, ample room when configured in a twin share. I stayed in a balcony cabin with a sofa as well as table and chair, and still quite a bit of room to walk around.

First port of call (sailing only) was Glacier Bay. Expected to wake up and be surrounded by ice floating around our ship. Upon entering Glacier Bay at 8.30am, it wasn’t until 3 hours later at 11.30am before we actually reached Margorie Glacier. A very impressive sight, but the most photographed Glacier is the Grand Pacific Glacier, which was a further hour sailing up the Bay. A full day in this region was highlighted by ‘carving; from the Grand Pacific Glacier… unfortunately I was too slow to grab the camera! One thing I did not expect was that our ship actually cruised extremely close to the Glaciers, even more so than the small ship we actually saw in the area, so much so that it felt you could reach out and touch the ice.

Next day we arrived in Haine, for shore tours that encompass both Haine and Skagway. I didn’t opt to do a shore excursion but instead wandered around the townships. Haine is a quaint township, and very pretty, but in all honesty you can see the entire town in 15 minutes – not the greatest of towns for sightseeing purposes.

I caught the ferry from Haine to Skagway (45mins by fast ferry) at a costing of USD$71.00 per person return. This is quite expensive but well worth it. Skagway is a great town (only 1 mile long and 2 blocks wide) but for the shoppers this is the place; there were three cruise ships berthed at Skagway – so I recommend finding a cruise where the port is Skagway, rather than Haine.

Next we stopped in at Juneau – a beautiful city, with all ships berthing predominately in the city centre. A mere 2 minute walk from the ship will have you in the heart of the main street, with the amass of jewellery and souvenir stores being at your beck and call. We only had a limited time here to actual see the city, as we had a shore excursion combining Mendenhall Glacier with that of Whale Watching. The weather also turned very wet, wild and windy here, so limited time was spent roaming the city as there is not much protective cover! Our shore excursion departed at 10.30am and had us returning to the ship 20 minutes prior to sailing.

Mendenhall Glacier was amazing to see and if travelling on a 7 night Inside Passage Cruise, this would certainly be a highlight! However, I can’t help but think that if you have seen Glacier Bay first, it is in reality merely another Glacier. Our tour spent some 2 hours here, though I feel that an hour would have been enough, as there is very limited cover and no restaurant or food & drink operations here due to bears. Whale Watching lasted some 3 hours, with the experience well worth it. We saw many Orca’s in this time frame, but you have to be quick with the camera.

Ketchikan is again a very nice little town, although this would have to be the wettest and coldest city I have ever visited! The buildings are all very much ‘Gold rush era’ with the highlight being a visit to Dolly’s House – a must visit for anyone visiting this area. Out shore excursion here was the Lumberjack Show combined with the Totem pole park. The lumberjack show was good, but a bit cheesy. The totem pole park was interesting, though I would have probably enjoyed this more if the weather weren’t so miserable!

Prior to arriving in Vancouver, our last day at sea was spent in the Inside passage. I thought this area would be again just cruising the Glaciers – instead the Inside Passage is cruising through lush forested Islands which makes for very scenic cruising.

On arrival in Vancouver, we disembarked the ship early at 7.30am and began a sightseeing tour of the city, visiting Stanley Park and the more central downtown area and shopping streets of Robson Street. We then made our way on the 1.5 to 2 hour drive to Whistler and travelled to the top of Whistler mountain per the Gondola, but only managed to say on the mountain for about 15 minutes due to high winds and the subsequent closure of the Gondola.

The following morning we travelled back to Vancouver via the Capilano Suspension Bridge, and enjoyed some 4 hours in Vancouver  enjoying the many shopping and sights of central downtown Vancouver. Our dinner tonight was hosted by Fairmont Waterfront hotel, with a sight inspection. Rooms are superb, large modern and excellent views. Hotel is located directly across from Canada Place (the major shipping berth) and merely a 10-15 minute walk from the heart of Robson Street shopping precinct.

Transferred to the airport at 8.00pm (quite a bit of a distance by coach) and boarded our flight at midnight per Air Canada bound for Sydney.

A great experience and very enjoyable.