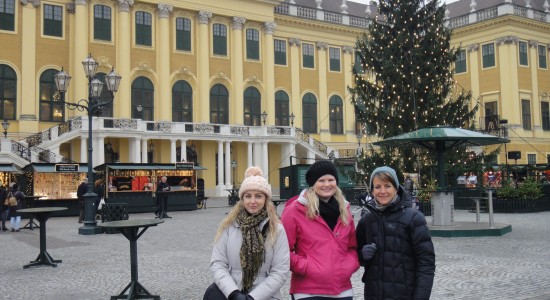 In November 2014 Karen Jones, Courtney Jackson and I were lucky enough to visit Europe and enjoy a 6 night cruise with APT from Budapest to Regensburg as well as seeing the sights of Paris, Munich and London.

Our first stop was Paris where we stayed at the beautifully Parisian Victoria Palace. We did a Hop On Hop Off Bus to explore all the main sights – Arc de Triomphe, the Lourve, Notre Dame and of course the Eiffel Tower. We also couldn’t resist having a croissant and glass of French champagne!

We then travelled to Budapest so we could join our APT Cruise onboard the MS Amaverde. What a beautiful ship with exceptional staff! One benefit that APT has recently introduced is their ‘Freedom of Choice’ programme. They offer you a number of onshore activities that are included in the tour cost and we found that this gave us great freedom in choosing onshore excursions. On our first night we did an illumination cruise on the Danube – what a spectacular sight – seeing both the Buda and Pest side lit up. The next morning we had a city tour of Budapest and were treated to a private performance in the Opera House.

Vienna was the next stop, a truly elegant and grand city. We had a walking tour of the main sights including St. Stephens Castle and then plenty of free time. What better way to spend it then to treat ourselves to Apple Strudel and Viennese Coffee! Later that night we were extremely lucky and had a private Vienna concert at the stunning City Palais Liechtenstein with the Mozart Boys Choir. We had ‘Freedom of Choice’ the next day and visited the most famous and beautiful palace in Vienna – Schonbrunn Palace. It was fascinating listening to all of the history and hearing about Maria Theresia who lived an amazing life.

The next day we left the big cities behind and cruised down the Danube to the picturesque country towns Durnstein and Melk. In Durnstein we did a walking tour and learned all about the castle where Richard the Lionheart was imprisoned. We were then treated to a wine tasting where we sampled some of the local wines as well as Marillenschnaps (apricot brandy). In Melk we visited the Stift Melk a working Benedictine monastery for the last 900 years which is still active today.

The following day we had ‘Freedom of Choice’ touring and chose to visit Cesky Krumlov (Czech Republic) in the heart of the Bohemian Forest. Walking across the cobblestones to reach the stunning castle you could easily think you were in a fairytale.

Our last stop on the cruise was Regensburg – a preserved medieval city. After a walking tour down the narrow alleys with quaint shops we visited the impressive gothic cathedral. We then said goodbye to our new friends and Amaverde and caught the fast train down to Munich. Later that night we were able to enjoy the magnificent Christmas Markets in Marienplatz while sipping on our hot Gluhwein (mulled wine). Before heading home we had a quick stop in London to visit the main sights and for a little shopping in Oxford Street.

Although November/December is a cold time to visit Europe it really is beautiful – the Europeans really know how to get into the Christmas Spirit with markets and lights everywhere you look. There is also the benefit of hardly any crowds around the tourist attractions!