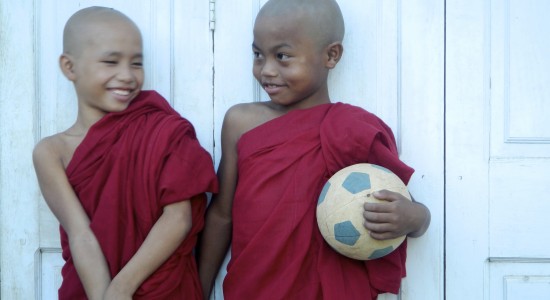 “Beauty is meaningless until it is shared.”

George has a point. Myanmar, as it is known today, is a country of endless beauty.   From the colourful patchwork hills draped in crops of sesame, ginger, tomato, chilli, cabbage, cauliflower, corn, rice and a smorgasbord of other spices and vegetables to the tranquil waterways of Inle Lake and the endless spectacle of gold leafed pagodas, postcard images appear at every turn.

All this was shared with our little group of twelve eager and interested travellers. We all marveled at the simplicity of the life of the locals still plying the rivers in their shallow, narrow fishing punts. Custom has it that the majority of women work in the fields while the men care for the children. Life is simple but not always easy. Women shovel heavy river gravel onto trucks for a pitiful $3 a day. No unions here to push for better conditions. Fields are still tilled with ancient contraptions and bullocks haul laden carts with a look in their eye of total resignation.

Religion dictates not only rigid discipline for the monks but for a wider belief in a better after life promised according to offerings.

The monks, often in their designer glasses and tapping on their iphones, rarely put their shoulder to the wheel but a tolerant society of believers accepts the status quo.

We were accommodated in fantastic hotels in Yangon and Inle Lake and our 7 day cruise on a new river boat up the majestic Irrawaddy River provided a further highlight on the marvelous tour. The standard of food on the ship was outstanding.

Myanmar is a nation on the brink of change. An expected influx of three million tourists next year will place enormous strain on its infrastructure. IT communications are still fundamentally difficult and while some hotels are providing an extremely high level of hospitality and efficiency, there are not enough of them.

Go now and share the beauty of this exotic location. See it before it is changed forever and becomes swamped by western ways and loses its simple charm and innocence. Invasion over the years has at those times corrupted Myanmar’s innate tranquility. Current politics aside, enjoy and explore one of the last outposts of a once larger mysterious East.