Ireland provides an awe inspiring backdrop for all sorts of holidays. With gentle walking tracks, adventure activities, rich history and vibrant culture, we have compiled just some of our favourite areas for you to explore.

The capital and largest city of Northern Ireland, Belfast is a large suburban sprawl that sits against a beautiful rugged Irish landscape. From the shopping at St George’s market, to the interactive insight into the building of the Titanic and the wall paintings that document he turbulent 20th century, Belfast is a vibrant hub of culture and creativity.

Start at City Hall, the magnificent architecture a centrepiece on Belfast’s skyline. It’s worth doing a free walking tour of the inside, or just pack a picnic and enjoy lunch in the surrounding gardens.

The Titanic Belfast opened in 2012 and provides a full immersive experience of the Titanic, from the initial concept to the sinking. Take the Titanic Quarter Walking Tour around the dock and pumphouse on the waterfront, then enjoy an afternoon tea in a replica of the Titanic Suite, complete with staircase and jazz accompaniment.

The Cathedral Quarter is an exciting cultural hub that surrounds St Anne’s Cathedral, a magnificent piece of gothic architecture that sets that tone for the whole area of the city’s oldest and most beautiful streets, public areas and buildings, from the Gothic period. The Cathedral Quarter is home to several festivals and events as well as restaurants, pubs and hotels. It is the place to go for entertainment and cultural artsy experiences.

If you are in Belfast around the end of October, enjoy the annual Belfast Festival at Queen’s, the UK’s second largest arts festival, which celebrates all things music, theatre, literature, comedy and much more. If you enjoy the culinary side of travel, head to Belfast Restaurant Week, also in October. Belfast Music Week is celebrated in November every year and embraces all genres and unfolds across venues and streets throughout the city. 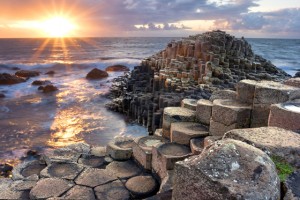 Antrim is the home to the UNESCO protected Giant’s Causeway. A landscape of dramatic cliffs, the Giant’s Causeway is a landscape of dramatic cliffs perfect for a day trip. Visit the infamous unique volcanic basalt-columns, climb Shepherd’s Steps and hike along the cliff top trail for an unsurpassed view of the dramatic coastline. Also at the Causeway is a visitors’ centre complete with cafe and exhibition area. 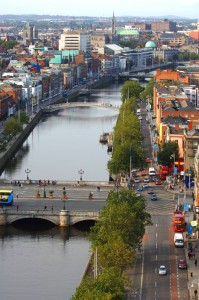 Dublin, the capital of the Republic of Ireland, is known for its rich literary past, boutique shopping and traditional Irish pubs and fine restaurants.

If you fancy a spot of shopping, head across to Powerscourt Shopping Centre on William Street. Housed in this magnificent Georgian building are boutiques, restaurants and antiques. The building served as Lord Powercourt’s townhouse in the 18th century. 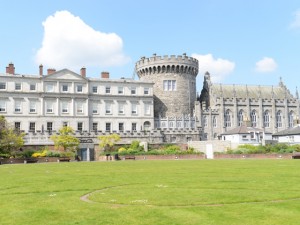 Take a specialised tour around the 13th century Dublin Castle, which has served as a military fortress, prison, treasury, courts of law and the seat of British Power. Dublin gets its name from the ‘Dubh Lin’ (or black pool) that runs under the castle and the city. Also on the grounds is the Chester Beatty Library, an award winning museum that boasts incredible collections of international treasures.

A stroll through the cobbled streets of Trinity College in the city centre will throw you back to the 18th century, the time of the building of the Old Library. This has particular historical importance, as it is the home to The Book of Kells, the famous 9th century gospel manuscript.

Another of Dublin’s most iconic attractions is the Guinness Storehouse. Learn about the traditional brewing process on a self-guided tour over 7 floors and learn to pour a proper pint of Guinness. Drink it in the Gravity Bar which has incredible views over Dublin. While some suggest going early to avoid the crowds, watching the sunset from the Gravity Bar is an incredible experience.

Enjoy a walk down the canals of Dublin and find yourself at one of the great icons of Dublin – the Ha’penny Bridge. The pretty arched walkway over the River Liffey connects North and South Dublin. The official name of the bridge is the Liffey Bridge, but gets the name Ha’penny from the building of the bridge in 1816, where the builder William Walsh was allowed to charge users a halfpenny toll for 100 years in return for his labour.

Galway is a beautiful harbour city on Ireland’s west coast. Experience the contrast of a popular seaside destination with beautiful beaches and a long winding promenade, with the thriving, cosmopolitan city. This is where the Corrib River meets the Atlantic Ocean, marked by the Spanish Arch. Small fishing boats and wild sea birds provide a beautiful backdrop for incredible sunsets over Galway Bay.

The Claddagh in Galway city

The coastal location of Galway means there are many adventure activities to try, including windsurfing, mountain biking, diving, kayaking and surfing. Or just spend a day strolling the promenade, breathing in the salty air. If this is more your speed, you will definitely need fish & chips – preferably doused in brown vinegar.

The city boasts a maze of cobbled streets lined with colourful shop facades and a busy cafe culture.

Head to Galway City Museum to see a fascinating collection of artefacts dating back to prehistoric times and to gain a deeper understanding of the history, culture and stories of the people of Galway. For something to delight toe kids, or to escape a rainy day, you can also head along to the National Aquarium, which houses 170 marine and fresh water species. You can feed hungry fish, hold starfish and spider crabs, or explore the depths in a model submarine. 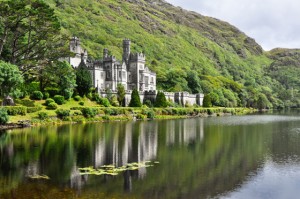 Kylemore Abbey is Ireland’s most romantic castle, set against a backdrop of rugged Irish landscape of lakes, rivers, bogs and mountains. Gaelic is still spoken here, and traditions run deep. The Abbey displays characteristics of the neo-gothic era, and today houses the Irish order of the Benedictine Nuns.

From Galway you can explore the Burren region, a strange and unique area. The impressive scenery is made up of a high plateau of porous limestone, where no trees or grass grows, but the cracks between the limestone allows for native flowers to grow – especially incredible in spring. The area is littered with castles and monastic ruins, and embodies the Irish countryside the way you would expect, wild rocky outcrops and lush green grass. This is also the gateway to the Cliffs of Moher. With sweeping views across the Atlantic, one can see all the way to Galway Bay and the Aran Islands on a clear day. O’Brien’s tower stands at the highest point and has been a viewing point for visitors for hundreds of years. The tourist rush here is between 11.30 and 3.30, so we suggest making an early start or cruising by in the evening to see the sunset for a more intimate experience – standing on the edge of the world.

Ireland’s third largest city began life as an island and now has many bridges crossing many channels, making it best to explore by foot. It is a dynamic and thriving centre with 17th century alleyways contrasted against modern icons. Discover amazing views of the city from Shandon, and walk back down the hill through galleries, antiques and stop for a coffee in the old squares. For 360 degree views of the city, climb the steps to St Anne’s Church.

St Fin Barre’s Cathedral is a site to be admired with gothic spires and mediaeval charm, adorned with stone gargoyles and golden angels. You can enter the Cathedral for a small fee, where you will find a magnificent interior of marble and quirky artefacts.

About a half hour drive from Cork City is Cobh, a great little seaside fishing town and one of the finest natural harbours in the world. This was the the single most important port of emigration in the country. The Heritage Centre in the old Victorian Railway station hosts a multimedia exhibition of the Origins, History and Legacy of Cobh, along with its rich maritime history and farewell point for many convicts bound for Australia. Brightly coloured houses line the streets and Cobh Cathedral sits on top of a steep hill, looking over the pretty town. 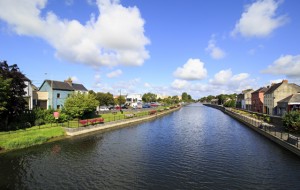 City Kilkenny on the River Nore

In the south-west of Ireland, Kilkenny breathes old-world charm with old-fashioned shopfronts, a riverside castle and 17th century passageways dotting the city. The architectural charm of the city comes from the fact that the city was the centre of political power in the middle ages. You can canoe down the white rapids of the River Barrow, take a bike tour or explore Kilkenny Castle. Or undertake The Kilkenny Way, which involves learning the oldest and fastest field game in the home of Hurling. This is hands on experience of Irish culture and sort of a mix of hockey, lacrosse and baseball and looks unbelievably fun (if not a little dangerous in the big leagues).

Killarney boasts some of the most amazing scenery in the world. This is what you think of when you think of rugged, back road Ireland. Killarney is 26,000 acres of lush green woodlands that seeps history. You will definitely need good walking shoes here, as there are many walking trails that document different interesting historical events.
The Ring of Kerry makes for an awe inspiring scenic day drive. 110 miles of unspoiled scenery along the Iveragh Peninsula takes you through spectacular mountain ranges, rivers and rolling countryside. Stop along the way to stretch your legs by exploring sandy beaches and cave complexes. Towns stuck in times long ago – houses with thatched roofs, blacksmith quarters and hen houses – dot the drive, where you can experience traditional fare. One of these such towns is The Bog Village, which has won a national heritage award. 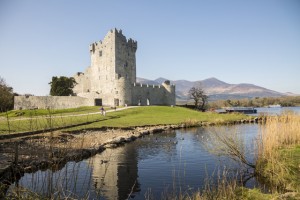 Ross Castle, on the Lakes of Killarney

For even more of Ireland’s natural beauty, head to the Lakes of Killarney, which sit in a broad valley between the mountains. A part of the Killarney National Park, there are many natural, historic and religious sites on the three lakes. Muckross Abbey, Muckross House and Ross Castle lie on the Lower Lake (Muckross Lake). Experience the lakes from the water on an hour cruise of Lough Lein, or jump on a traditional open boat from Ross Castle across the three lakes, passing by Innisfallen Island, Bricin Bridge, Colleen Bawn Rock, Torc Mountain, Old Weir Bridge, the Meetings of the Waters and finishing at Lord Brandon’s Cottage.

Or sit back and relax as you travel by traditional jaunting car through the Gap of Dunloe, a glacial valley that stretches through the MacGuillicuddy Reeks mountain range. Glassy lakes, luscious green grass and severe rocks jut out of the countryside. Revel in the beauty where the only sound is that of your horse clip-clopping over stone bridges. Make sure to take in the views from Aghadoe and Ladies View.

The Great Escape to Support the East Coast Tour