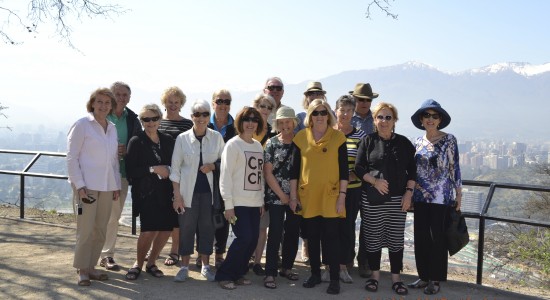 Judy Tierney has just returned from escorting another of her fantastic tours, with a great group, including some of our Travelling Ladies Club members!

This was a big one. Six countries in a month and so much to see and do it was not for the faint hearted. However, our intrepid group of 17 put in a spirited and often energetic effort to enjoy an extraordinary holiday.

The “bucket list” is often mentioned when ticking off countries you really want to visit or things you must do and this trip surely notched up some great achievements.

Eight of us first visited Galapagos Islands to meet the creatures and wonders which Darwin studied to establish his theory of evolution. Seeing the Blue Footed Boobie birds delighted us all. Snorkelling above swimming turtles and sea lions, negotiating hazardous volcanic rock paths and absorbing the isolation of these remarkable islands has soaked the memory bank.

A few days later in Lima, Peru, we caught up with our other travelling friends and headed for the tranquility of the achingly beautiful Sacred Valley which sits at the foot of the astonishing site of Machu Picchu. We stayed in a beautiful former nunnery but today’s facilities bare no resemblance to the deprivation experienced by its former inhabitants! For this we were very grateful.

We took a train to Machu Picchu and tackled the quite difficult steps and paths in this eerily placed and abandoned Inca ruin. It is an experience never to be forgotten. How or why it was sited there, high in the jungle clad mountains, remains a mystery and despite the Inca’s building and mathematical expertise they had no written language to reveal their intentions or achievements.

Guinea pigs. No-one can truly say they’ve had a South American experience if they haven’t tasted the hapless guinea pig or ‘cay.’  Skewered through the most private orifices and thoroughly roasted over hot coals, the little beasties provide a succulent morsel or two for the devotee of sparse meaty bits and an intricate framework of fine bones.  This opportunity was relished by our group who got into the spirit of the moment by posing for a photo with the glossy grilled carcasses before sharing a few plates of them!  The stuff of bravehearts.

Next, to Bolivia and the vast Lake Titicaca and its floating community of the colourful and cheerful Uros Indians. They live on enormous pads of reads plucked from the lake and packed to form a base for their villages. After visiting the local school, where very young children were learning basic algebra way beyond what is taught in Australia, we were privileged to see more of the lake in their elaborate canoes and some of us even attempted paddling them.

Thankfully we dodged the earthquake in Chile and instead indulged ourselves in a visit to the hills to a famous vineyard (of course!) and ate and drank heartily at a local restaurant serenaded by a resident minstrel. Santiago is circled by the snow capped Andes and has become a vibrant modern city despite its dark and ugly political past.

Then to the colour of Rio, Brazil and visits to the famous Copacabana and Ipanema Beaches and the simply awesome statue of Christ the Redeemer which sits high above this famous city .  I was surprised that it was so easy to access by train and then by elevator right to the foot of the mammoth cement structure.  We didn’t want any more steps!

Another outstanding experience was taking in the might and majesty of Iguazu Falls which we viewed from the Brazilian and Argentinian sides.  This is truly one of nature’s greatest sights, a breathtaking flow of water cascading over more than 30 separate cliffs.

On to elegant Buenos Aires and a taste of tango which reminded us of bodies lithe from past years! Many of us visited the glorious Opera House which recently closed for nearly four years to have a thirty four million dollar make-over. We were lucky to see the result in all its splendour.

This was a truly wonderful holiday. At times small stresses challenged us momentarily and it would be impossible to cover so much ground and not meet some minor frustrations. Midgie bites from Machu Piccu, altitude sickness, tummy unpredictability and oh so many steps!!

It was certainly one of the more diverse tours I’ve had the privilege to escort and I can’t wait for the next! Start getting fit! (The last message is for me.)