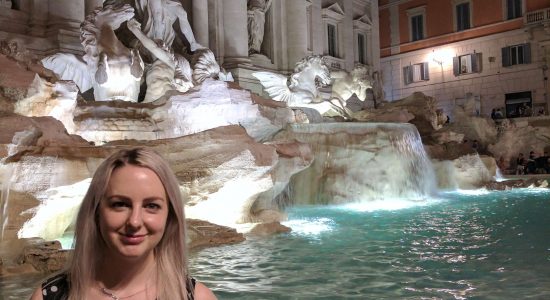 In July, I was lucky enough to experience Italy with Insight Vacations, on a luxury coach tour! Sometimes overlooked or disregarded, coach touring is a brilliant way to see everything; sitting at this height, you can see landscapes changing and locals going about their day, with the bonus of being able to get into little towns and villages on the way.

It’s been 11 years since I have been to Italy, and I fell in love with it all over again.  As soon as we left the airport in Rome and started to drive through the city, with its ancient ruins and dramatic monuments, my heart started to feel whole again, like it had been missing something but wasn’t quite sure what.

I had been told once that Rome is a place you either love or hate, but I disagree. How could you hate one of the birthplaces of Western Civilisation? The monuments are unfathomable and jaw dropping; it’s like nothing else in the world to marvel at the Trevi Foundation, or stand in awe of the Colosseum, or to open your hotel curtains onto the Roman Forum. The cobblestone streets get me every time and this is how you know you’re not in Kansas anymore!

Aside from Rome being absolutely spectacular, which really goes without saying, I wasn’t quite sure what to expect of Puglia in the south of Italy, so my excitement built as we travelled down to ‘the heel of the boot’. I expected a landscape similar to Tuscany – rolling green hills, lush hilltop towns, and wineries galore. To say I was surprised is an understatement. Instead, we found a sparse region, yellow grass & rocky hills, and thousands of olive trees!

We arrived into the UNESCO town of Alberobello, which surprised and charmed everyone. The little trulli houses (the roofs kind of a little like gumnuts) were divine, and to think people still live in them is incredible.

Just outside Alberobello is probably one of my new favourite little towns to date: Ostuni. The white washed houses sitting just above the Adriatic coast line could almost be mistaken for somewhere in Greece, and this little town stole the hearts of everyone. Puglia is an absolute must for Italy-lovers, being home to these less-tourist and off-the-beaten-track towns.

The food – mamma mia, where do you begin with the food in Puglia? You will have a more local experience wherever you go, and more farm to table options, with bold wines and simple yet delicious dishes. Make sure you take draw string pants; antipasto to begin, pasta for entree, followed by your giant main, then topped off with a dessert – and that’s just for lunch! Indulge though; when in Rome (or anywhere in Italy), do as the Romans do!

On our way to Sorrento, we explored the town of Matera, which looks like something out of a movie from medieval times; cave dwellings, ‘Sassi’ that were occupied right up until 1968, can only be seen to be believed.

After Puglia came the big draw card: Sorrento, the Amalfi & the Island of Capri. Who doesn’t love a coastal setting, with towns perched atop cliffs that make your heart skip a beat when you turn the corner! Limoncello, leather products, gelato, restaurants, scenery, the coast – it’s too much! Capri is exactly like the postcards, and the colours in the grottos are indescribable; not even on the colour chart! This island needs to be appreciated to its full extent, from cruising around the island, taking an open top taxi, exploring the gardens, shopping in Capri town, eating in a casual Michelin Star restaurant ‘Mammas’, then taking the Funicular back to the bottom. Everything is a must.

Do yourself a favour and explore the South of Italy for your next trip; you will gain a whole new appreciation for the country, and it won’t be your last time back. Your heart will ache for it.